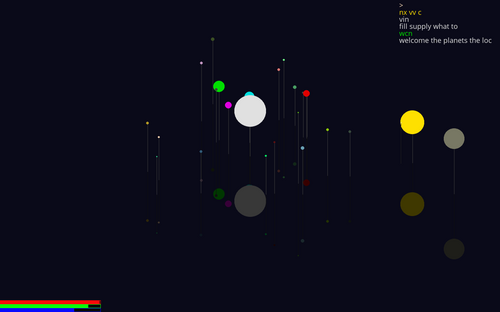 I want to begin by thanking Extra Credits for hosting their game-jam. It was helpful to get a timeline for building and releasing this game, and I enjoyed their creative limitation.

I wanted to make a game about writing messages to other players and sometimes seeing them lost to time and space. It needed to be multiplayer for that to work, and while I got some socket based multiplayer up and running during the game-jam, I haven't yet worked out the server hosting, so it never got very playable.

In the time between the end of the gamejam and this release I added some motion to the game, and updated the generation of text while adding a tutorial. The planets now talk, but most of what they have to say is gibberish. I want to fill it in, and hand code more of the system. For now, only the sun has anything hand coded to say. It plays a role as a tutorial, and if you sit there long enough it will suggest you explore.